Described as a 'special feature on wearables and interactive fashion beyond celebratory reviews of the latest gadget bling'.

This was quite possibly the most bizarre evening with speakers I've ever attended - from the sublime eccentric, to the damned right brilliant to the 'What The ?' 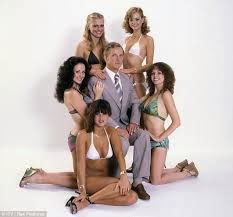 It got off to a slightly chaotic start, whilst the Chair, Stefan Lutschinger (game designer, curator, artist & lecturer of Media, Culture and Communications at Middlesex University)  fumbled with his notes and tried to locate his ‘cathedral’, whilst 'co-host’ Adriana Smentek (student of previously mentioned University Course) hovered glamorously by his side.

Now, I have to say that this was the most incongruous aspect of the evening.  An evening dedicated to technology and futuristic type things, but with the presentation style of a game show from the 80s or 90s.  I mean, Adriana was very beautiful, but her role aside from this was less than clear . Aside from introducing herself she didn’t say a word all night.  It seemed to be slightly out of sorts with the theme of the night, and in fact any respectable event this decade!

But anyway, let's leave that to one side. First we were treated to a live dance installation (Theia’s Aura by Simon Sarginson).  It took me a little while to work out that the colourful bubbles on the projector were following the dancers movements, but once I did, it made much more sense and was actually rather enchanting.  If you want a more artistic description 'the technology, rather than inviting us to succumb to its abstract inhuman interface and getting more intimate with it, hides itself from the viewer and produces a reactive cloud using the body as a language to create a fantastical spectacle manifesting the imagination of the performer'. 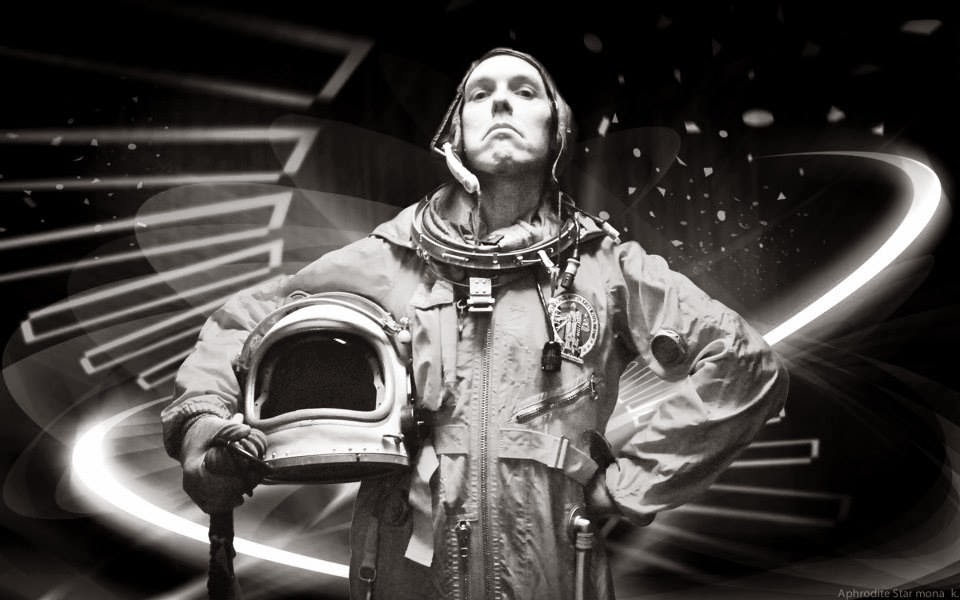 Next up was Prof. Johannes Grenzfurthner (founder of Monochrom an international art-technology-philosophy group, based in Austria), who is most definitely an eccentric sort.  He came to the stage dressed in a bright orange astronauts suit.

His topics encapsulated various types of robotics interlinked with clothing and sex. He talked about some of the events that Monochrome are involved in which includes Festival Roboexotica where people create robots to mix cocktail,  which was kinda cool. See below image for Truth or Dare Shot Dress 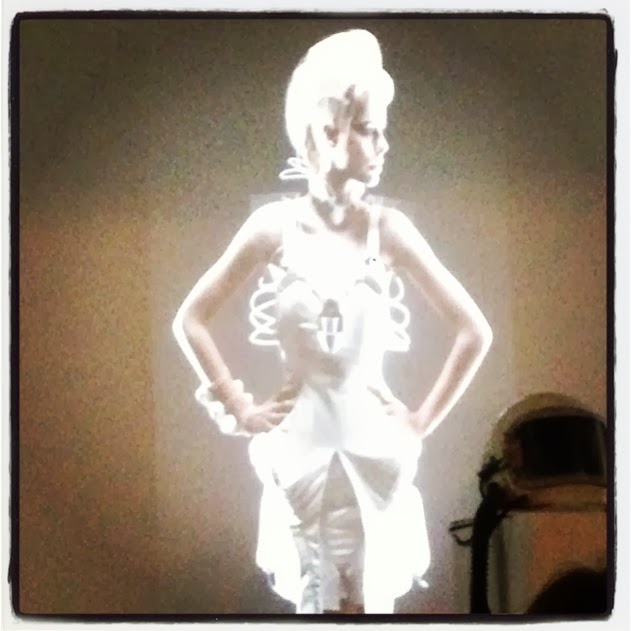 Monochrom also hold a conference about sex and technology called Arse Elektronika about how sex influences the development of technology - especially with the advent of wearables   - I’m sure you've seen some of the potential apps designed for Google Glass?.

But actually I think Jesse Darling actually did. (she is as her biog says 'an artist, curator and occasional essayist, researching the deep links between technology, power and experience').  She had been asked to have a critical look at – and through – Google Glass (or Google ass as she calls it). There was no ambiguity in her introduction regarding her dislike of some forms of technology breakthroughs, namely Google+ and Google Glass, which was pretty awesome considering she was in a room full of predominantly techie types. She offered a cynical yet humorous insight into her perception of world of Google Glass.

She highlighted that the advert for GG features an ethnic minority female wearing unisex apparel, however when researching which market the product was given to for testing, it didn’t exactly didn't exactly reflect the all quotas ticked poster girl.    Ah, instead white, men, generally looking oh so cool.   I have since discovered that there is actually a whole blog dedicated to this entire theme
http://whitemenwearinggoogleglass.tumblr.com/

She made numerous interesting yet defamatory comments about Google Glass which when taking into account the actual viewing functionality of the device concluded that it is pretty much objectifying (too much to go into here).  And I agree.  It was refreshing to hear someone speak so eloquently yet without pretension whilst defying the opinions of 'le cool'.

Next up was Dr. Phoebe Moore, (Senior Lecturer in International Relations at Middlesex University).  I have to be honest, I have absolutely no idea what the Doctor was talking about for the majority of her presentation (neither did my friend), I didn’t find it to be well structured or engaging.   Towards the end I picked up some interesting comments around how companies are 'quantifying life' all in the name of increasing productivity which really interesting and it would be great to hear about this in more detail.

A last minute fill in from Ilicco Elia  (Head of Mobile at LBi)  who spoke about how technologies might evolve. It would have been good to hear more from him, as perspectives from key people at leading agencies can be interesting. Unfortunately though, his time was rushed, as he had to make way for the next and final speaker....

Krõõt Juurak  (choreographer, performer and member of Chicks on Speed). This was about Pets. Right?  I used to listen to Chicks On Speed at after parties back in the day so I had high hopes. Unfortunately my hopes were not realised. I don't want to be mean so I think I will stop there.

I will be going to the next one.

Posted by Cotton Creates at 17:51 No comments:

Cotton Creates offers a Bespoke Service and this post gives an insight into how it happens.

This particular item hasn't undergone the full Cotton Creates Transformation Process, because it is infact going to reside in my home, and therefore, the first couple of stages have been omitted (one would hope I know what im looking for!)

Plan
Source a small table that could be used as a key table in my home.  Luckily I was home in Sheffield for Christmas which is a haven for antique goods, definitely preferable to the over-scoured London town.

Discovery
And here is the pretty little item I found. A Victorian sewing table, perfect to turn into a key table.  As you can see, it still contained the original interior, however it was in very poor condition so sadly needed to be removed. 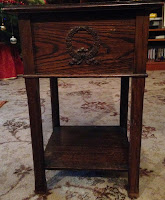 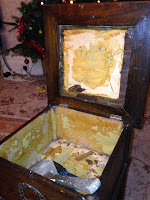 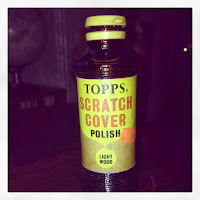 A chisel, hammer and file later and this was it's current state. As you can see, the interior lining was well and truly stuck down with copious resin. Which, so my dad informs me, back in the day would have been made from melted down horse hooves and bones.  I discovered that the table had a number of scuff marks, at which point my mum disappeared off into the kitchen and appeared with this bottle of Topps stainer and polish, from the depths of the cupboard with a price sticker of 19p on it....

Then, fabric, ribbon, glue and staples later here is the finished item.  Ready for it's new home. 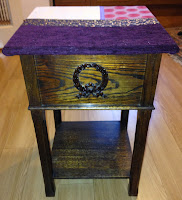 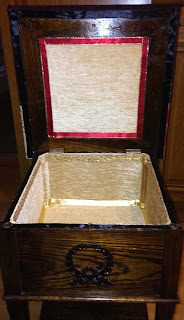 Posted by Cotton Creates at 17:04 No comments:

Cotton Creates
Eccentric, Ethical and Handcrafted; welcome to the world of Cotton Creates.
Dreary, disregarded pieces of furniture and other carefully selected lonely items are upcycled and transformed into opulent and boutique show-pieces you will want to invite into your world. Cotton Creates is a small creative and ethical furniture business based in East London run by myself, Hazel Cotton. My philosophy is to create memorable, one off pieces of art from a multitude of fabrics and arbitrary items accumulated from vintage fairs, charity shops, markets and other eclectic places